Hey Mages! It’s been a while right? We took some time in the end of the year without posting. We don’t intend on stopping the weekly update at all, we just thought we needed some time to recharge our batteries and have awesome things to talk about for the next weekly updates.

We hope you had wonderful holidays and we’re ready to get 2021 rolling. Let’s go!

So what’s up since last time?

We received the prototype version of the game that we sent for printing last month! We’re hyped, like serisoulsly hyped (So much that I can’t even type correctly).

You said it! (Or rather I wrote it for you, we’ll be honest there). This is a crazy milestone for us actually. We’ve been working so hard on the game, it’s both weird and exciting to see it printed properly and to be able to get such high quality cards in hand (We usually test out the game with proxy printed cards). We’re amazed by the prototype quality and we’re very happy about how it turned out.

This is so important to us we want to show it in its full glory with the best photo quality. So no pictures for now but it’ll come soon!

However we can give you a little something! We made the prototypes with the game box and we can show you how it looks. Here it is: 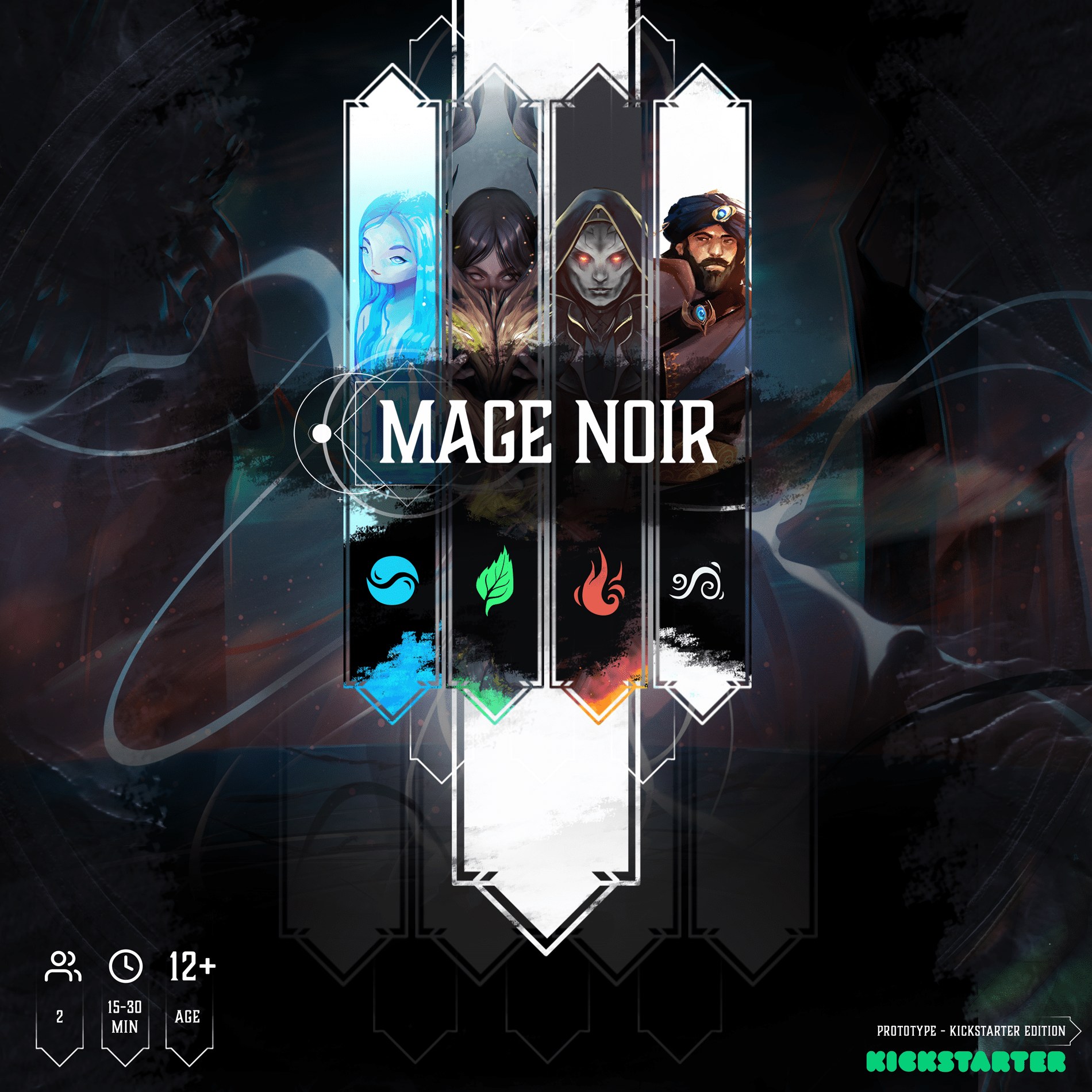 This is a great piece of work by Jeffrey Jeanson that perfectly captures the mysterious, magical and epic nature of Mage Noir, making sure to feature every neat stuff the box contains. This is truly great and we thank him a lot for his hard work, it’s awesome.

So what are you doing with these prototypes?

Well we’re sending some of them to various board game reviewers so we can get some video reviews of the game to showcase on Kickstarter.
I guess this isn’t the first time we say this in the weekly update. But as much as we love the game, we don’t have much of an impact as the game creators. It would even sound weird if we were like:

(I can’t wait to see the day this quote will be taken out of context).

So of course we’re asking external board games enthusiasts to tell you what they think of it. We can’t wait to see their opinion and discuss about the game.

Okay neat. And what else did you do?

Aside from the occasional work on the Mage Noir lore and the Circle’s history. We’ve mostly been focusing our efforts back on the Kickstarter campaign these days.

Yes! Hear us out, we’re getting back to Kickstarter my fellow Mages!

We’d like to launch our second KS campaign somewhere around mid february. So get on the starting blocks, it’s gonna be hell of a ride! Now this being said we still got loads of stuff to do, this campaign won’t prepare itself.

Thus that’s all for today Mages!

We hope you’re as hyped as us concerning how Mage Noir is advancing. Now before ending this weekly update, I do have a request for you my fellow regular reader. (Or even newcomers, hi welcome to the Circle!)

I know you’re enthusiastic about the game, we’d be so happy if you could talk about it to other players that you know that might be interested. We really wish that the game could be enjoyed by as many people as possible, so that it can thrive and become even better!

Now until next week, take care of yourselves Mages, and have fun!