In terms of what is actually new, the card layout. Concerning what we’re working on, we’re updating the overall visuals of how we handle Mana in the game, as well as fixing lots of bugs. We’re also making documents to plan out how we’re gonna organize the menu of the game.

Well it’s a big mockup with squares everywhere we would like to put one button or another. It handles the layout but we feel like it could be improved a lot. We only started it yesterday after all.

And what is it about Mana visuals?
The game is still in very early stage. And when we look at the Mana piles in the available Ether, we swich from the board screen to the Mana screen… fast. And by fast we mean instantly. It’s a bit tiring for the eyes as there is not animation or fade out to go from a screen to the other. We’re trying to make the whole thing a bit smoother for the eye and more immersive.

We’re also implementing pretty tricky card effects, like activating the effects of another spell and every side effects it can bring.

And what about the paper version?

Last week we told you about the card layout. It’s going on very nicely and we’ll show it to you guys soon. However if you want a sneak peek to start with we can show you a bit. 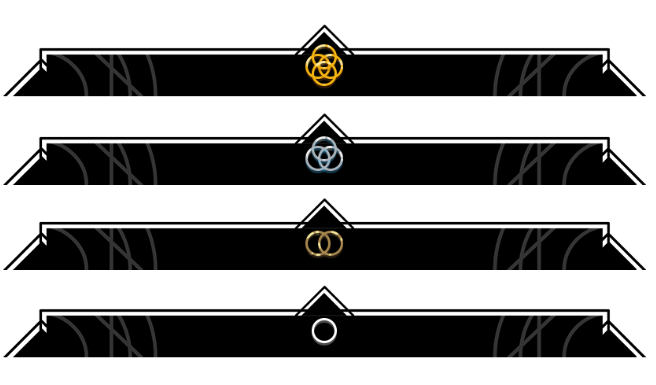 This is a small part of the new card layout. It’s used on the bottom of the card and many of you guys guessed what it represents. These are the different visuals for cards rarity. From bottom to top we have common, uncommon, rare and Legendary cards. The colors are neat but we wanted to make sure that color blind people would be able to differentiate them so we also decided to make an evolutive visual. We hope you like it.

We think it’s neat because it’s simple, elegant and doesn’t take too much room on the card. Knowing the rarity of a card is useful in Mage Noir but it’s not the most important aspect of the game, hence why we think the size and visibility of rarity right now is absolutely perfect!

And don’t get mistaken, even if we talk about rarity, no random booster involved, Mage Noir is a self contained card game and plans to stay that way. :)

We’ll show a bit more and more of the layout and the videogame soon. We’ve taken a lot of time to get them a bit more advanced before we show them but now we’re confident enough to give you more sneak peeks here and there.