Hey Mages! Here we are again for another weekly update. And still as happy as ever to discuss about Mage Noir with you!

There is an important poll currently going on in our facebook page. It’s important because it touches two very important aspects of the game.

We’ve always thought about Mage Noir as a collectible card game. It was very natural for us to go towards that direction since it’s what we’ve been playing most in terms of tabletop games.

Community’s returns on them

We give a very high priority to what our community thinks and what they want. Your point of view really has an impact on how we view the game and on the direction we take to improve it.
Discussing with more and more Mages, we noticed from various sources that many of you were more interested by a self-contained game than a collectible card game.

And since the question seemed to be important for you Mages, we decided it was worth asking directly.
This is why our facebook page is currently holding a poll asking if you would rather have a self contained card game or a collectible card game. This is an important decision and taking it without you wouldn’t feel right at all.

Are how Mage Noir was thought from the beginning.
We intend to sell starter decks containing a predetermined (i.e : already known) set of cards in them. This way you can get a starting deck that is fully functional as well as allowing you to get exactly the cards you expected to start with.

Then we intend to sell booster packs containing 15 playable cards. You don’t know what they contain when you open them but it makes it all more exciting. Will you get a very rare card? Will you find the exact one you were searching for?
Those packs would help you find cards to make your starting deck better, or craft a whole new one from scratch. It call for a strong ability to adapt and do the best possible combination of cards with what’s available to you.

It is also in favor of trading between players since everyone has a different collection.

You’d get into the game by getting a starter box, containing a predetermined set of cards. “Just like a starter deck in collectible card games?” Kind of, except here you would get more than a single playable deck, the box would be much larger and have a lot more cards. Plus you’d get enough to try multiple elements. This would be enough to get a good hang of the game and try multiple matchups.

Then we intend to create expansions that you could get regularly, with new cards, new ways of playing and new experiences. The contents of every box would always be known and thus, you wouldn’t have to search for a peculiar card, since you would know where to find it.

Both kinds of card games have their pros and cons. It is up to you to see what you prefer and to tell us right there.
You still have until the end of the week to let us know what you think about it.

It also allowed us to test out some small changes we made to the Mana system to make it more fluid and even more tactical. We’ll tell you more about it when we’re sure it is just right.

That’s all for this… Joking, you deserve another artwork of course!

Here is yet another Air card also illustrated by Camille Fourcade. This is the artwork for Zephyr: 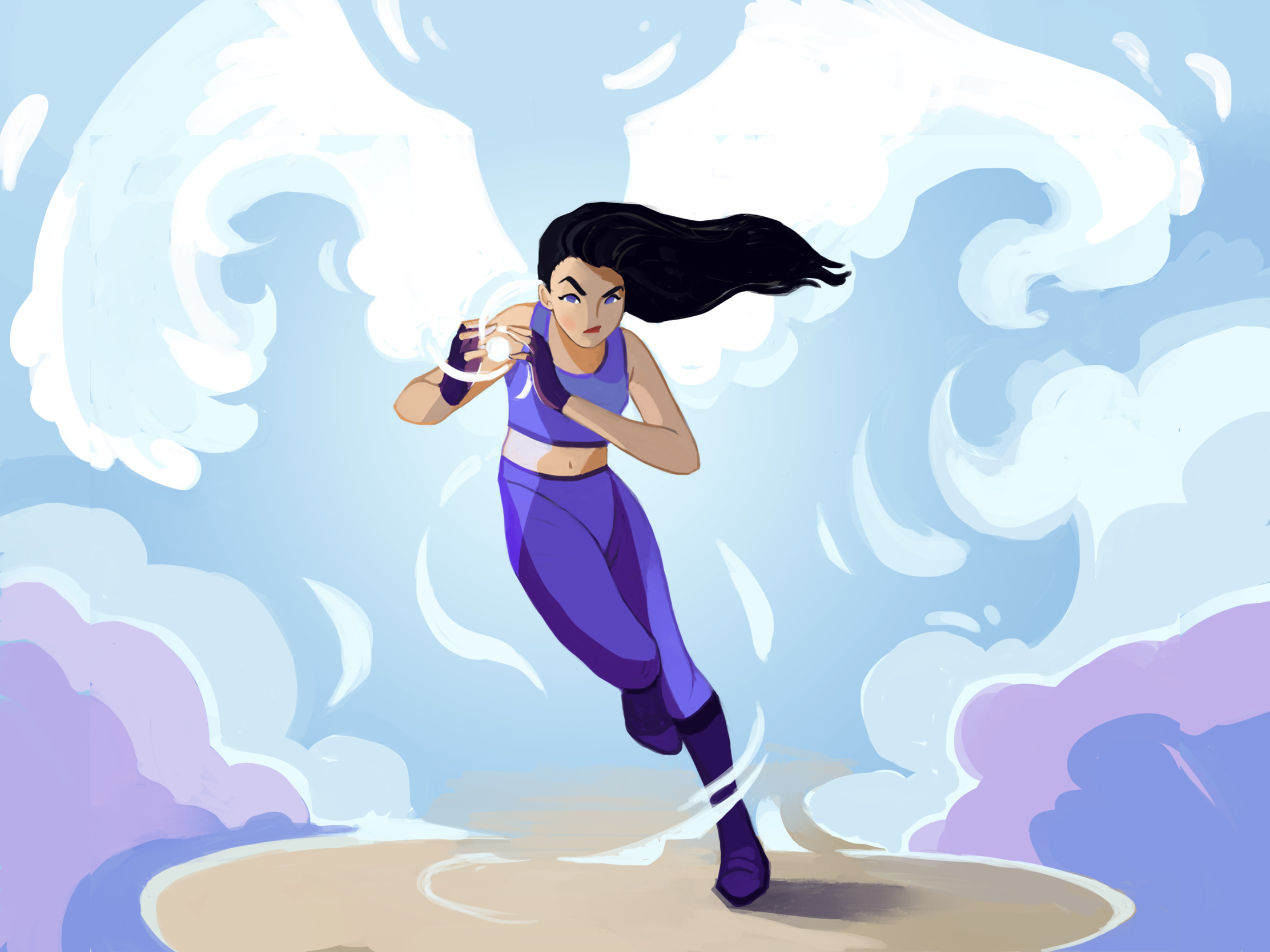 The position and feel of the character here shows exactly what zehpyr is all about: combat, determination and swiftness. Once again Camille does not fail to deliver gorgeous art for a single bit.

That’s all for this week Mages! (for real this time)

Looking forward to next thursday so that we can tell you once again how amazing you are at the end of the weekly update. Have a nice week! :)