Hey Mages! Lately we noticed that even if we talk about the 6 elements of Mage Noir regularly, we’ve always been rather quick when explaining them. Giving you their core concept but never going into details. And we think they deserve it.

So this post will be the first one of a series of six, talking about the elements, their identity, but also how they work and what we did to make them feel so thematic. Today we start with the fastest of the bunch, the drawing specialist, you guessed it, we’re talking about Air. 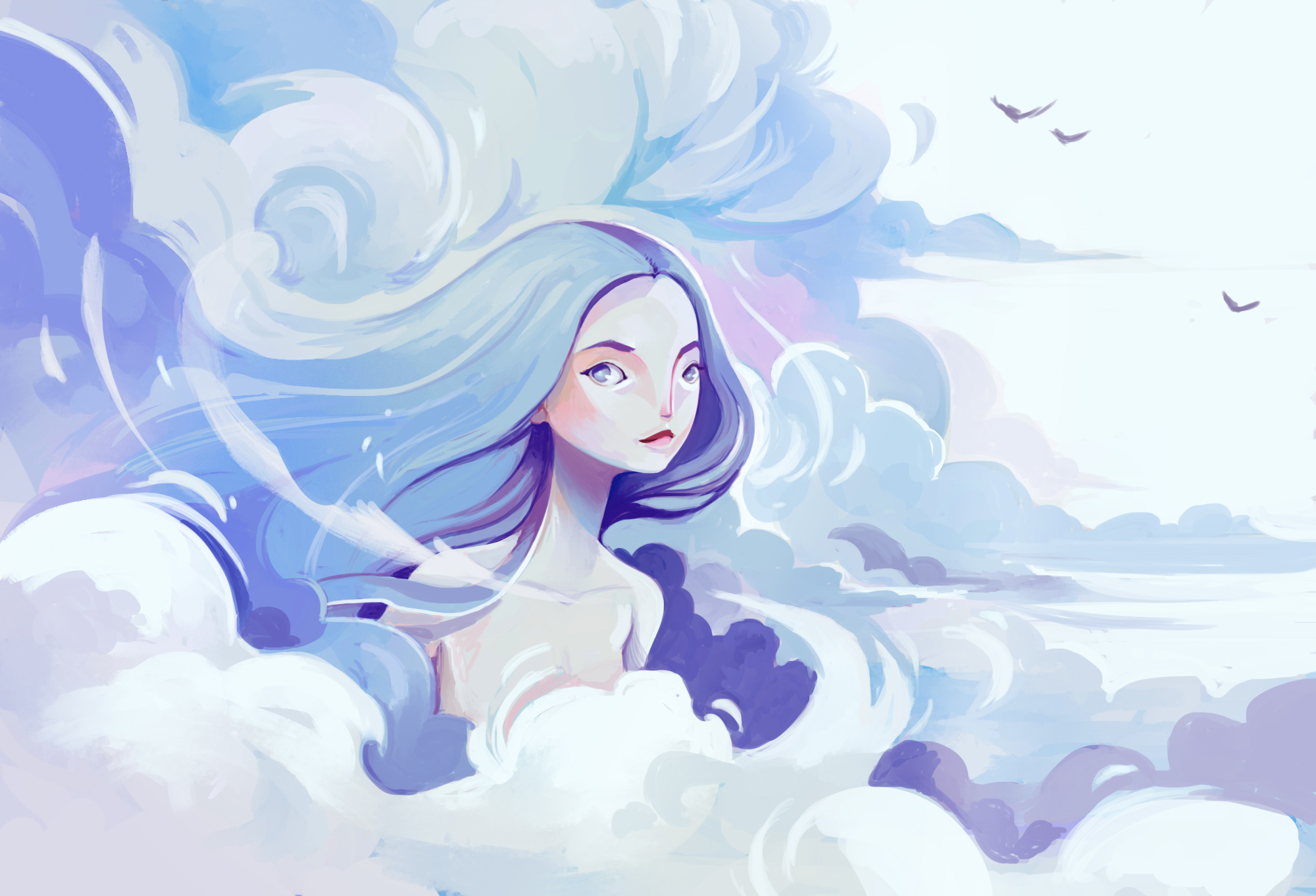 So what is Air about exactly?

Creating the core thematic of the Air element was pretty obvious to us. We had 3 main ideas that we wanted in the element:

The awesome thing when implementing natural elements in a game is that they just work so well because they already feel so familiar. Those 3 main ideas worked very well together and creating cards that conveyed these feelings was very satisfying.

What we did with Air:

To start with, we thought about what makes a spell feel volatile in a card game. For that you need it to have a small or moderate impact on the game by itself. This implies small changes in the state of the game.
Either by dealing small damages, having a small impact on the already existing resources, or how they affect the board.

For balance reasons, this implies fairly low Mana costs and this allowed the Air gameplay to feel quick naturally. Because obviously, having a lot of cards with low costs would allow you to chain them in a single turn. This impression of unleashing a flurry of small hits was pretty satisfying but it had one major issue. You run out of steam very quickly.
Indeed, spells and cards are a pretty scarce resource in a game where you draw only one per turn.

But running out of resources fast was not the theme of Air at all. It had to feel unstoppable. So we did the only logical thing to do. Give it more cards. 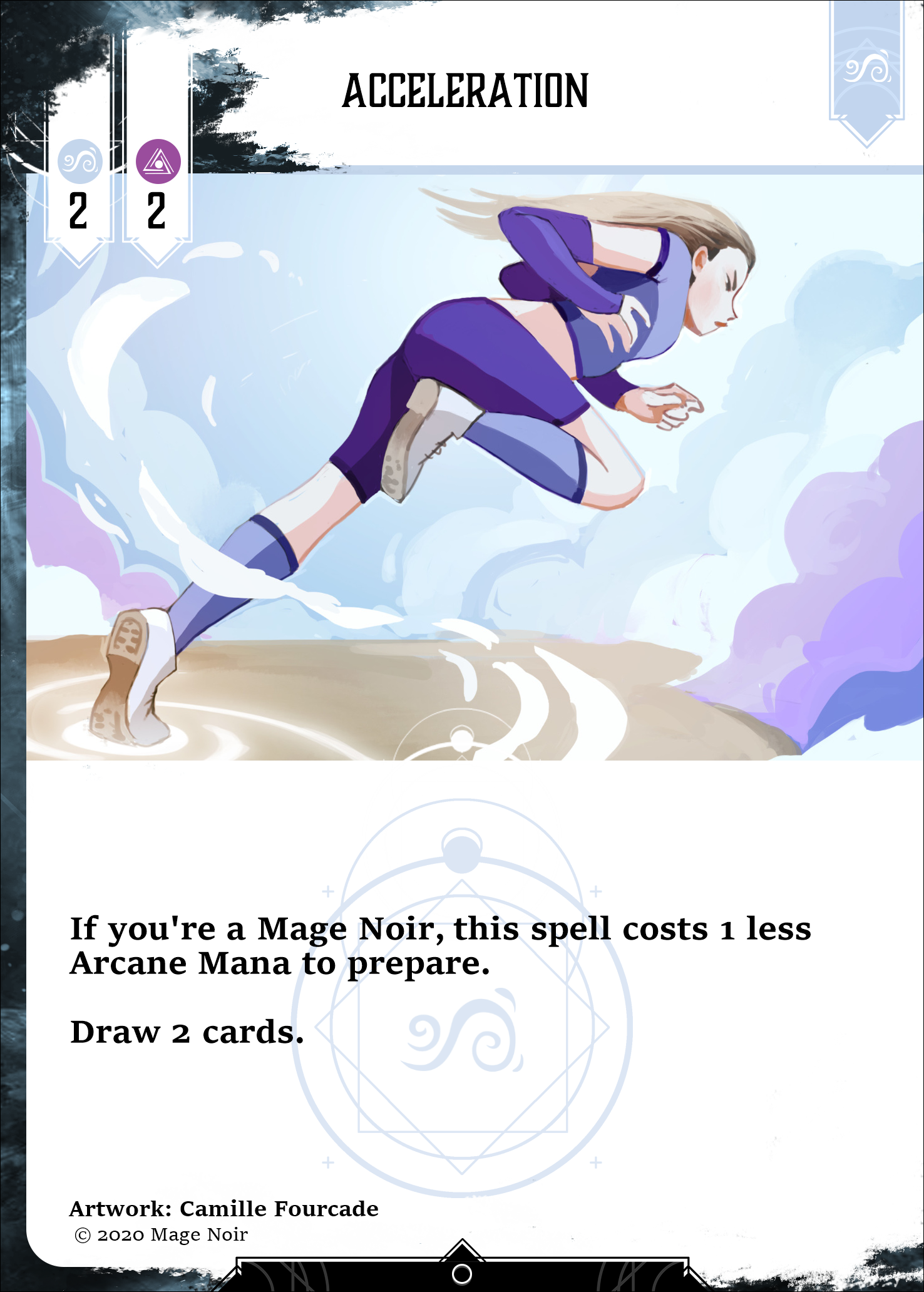 Hence why Air is the element that is the most efficient at drawing. Thanks to this, a well-prepared Air Mage could now chain a flurry of effects one after the other without running out of resources to cast. Even more interesting, you could end up emptying your hand while redrawing a new one as you use your powers, requiring you to think of your strategy on the fly, as you get new ressources to cast.
But even the strongest gust of wind can’t last forever. And when you end up lacking Mana or not having any more cards that would allow you to draw, the Air will just calm down by itself, peacefully.

The other thing we wanted to convey with Air is that the currents come and go, it’s an element that will howl uncontrollably at a certain moment, and be quiet just a second after. This makes it hard to control as you have to be smart with your resources if you want to use it to its full potential.

We figured that this part of the identity of the Air element was interesting to put in the way the Air components work.
First of all, it had to blow at different levels, different speeds. Hence why we decided to start with 2 main Air components. The “Blow” and the “Wind”. The latter would be a bit harder to get than the first. Either by costing more, or by requiring blows as a component. 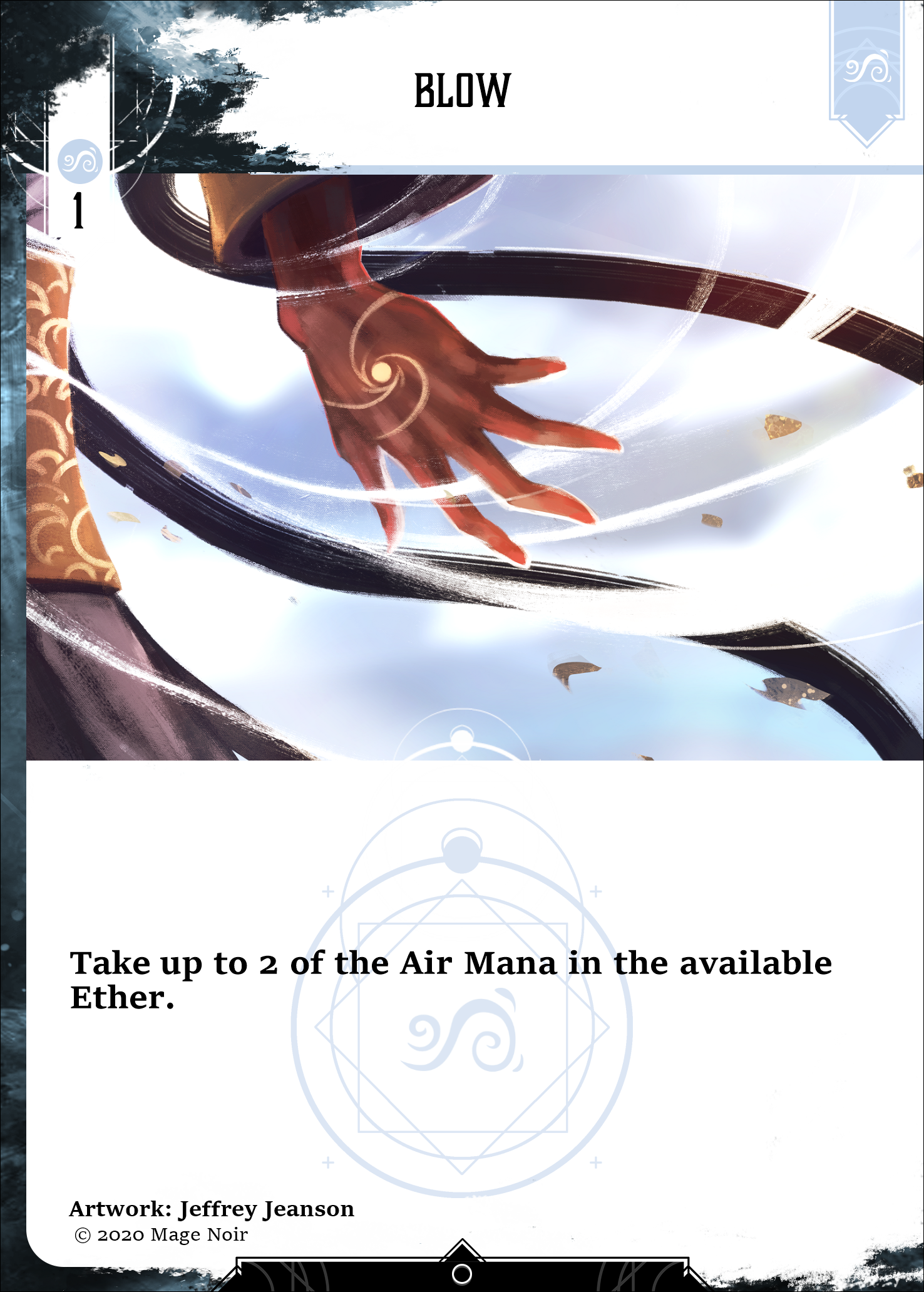 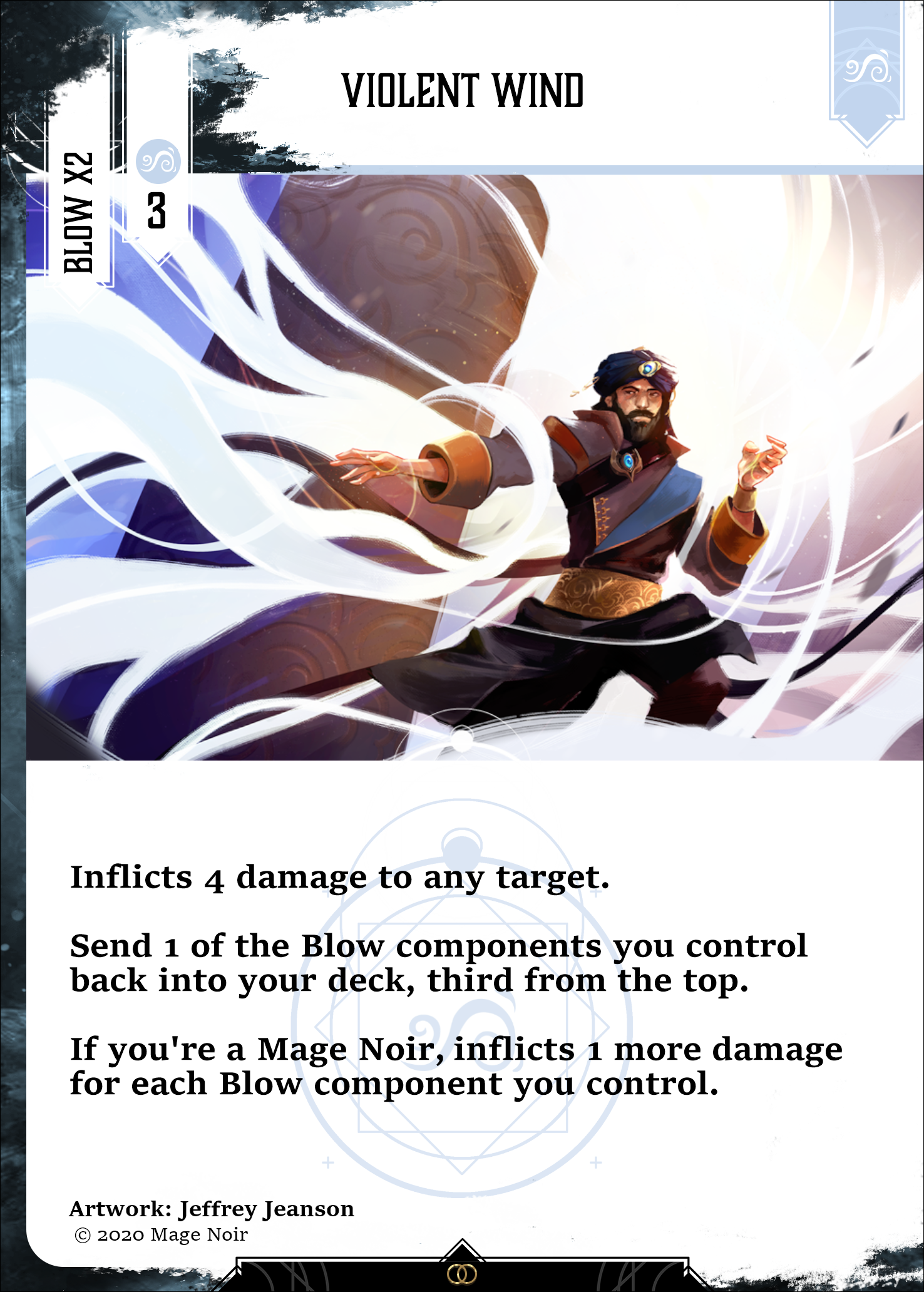 But how would we represent that your level of Air power would rise and fall during the game? Leaving them as such with the core rules would just make it so that the player would cast a “Blow”, then cast a “Wind”, and end up with the highest level of Air components until the end of the game.
Another option was to make them discard, that would indeed make them go away but it would create two issues. First the player would have no more components and run out of steam quickly again. Second, the Air would not rise back as we wanted it to. Our objective was to have the cards go away and come back after a short while.

So we decided to send them back into the player’s deck when they are used by stronger spells. But to make sure they’d come back, we decided to put them in the deck third from top. This implies that the player gets a chance to draw new cards, but he also has to wait a bit before getting his powers back.
This way the wind would go away and come back after a few turns, giving that thematic feel of an element flowing up and down at a variable pace. But this is only the tip of the iceberg as this mechanic would also create a very interesting new one.

When you use too many Air spells and create mayhem around you, you end up in the eye of the storm you just summoned. Okay but now how do you get out of it?

We’ll let you discover that for yourself when you play Air for the first time.

We hope we managed to convey our feeling about Air, it definitely is an element we are proud of in terms of design as it has a very satisfying feel to it.
We also hope you’re hyped for the next elements presentations, we’re getting them ready just for you.

We wish you a wonderful day and hope you had a good read. Until next time though, take care of yourselves Mages, and have fun!