Hey Mages! It’s been a while since we’ve had a design talk with you. As you may know from reading our weekly update, we’ve recently participated in the CIC esports business award.It’s a competition where a jury of professionals review e-sport projects to see which one is the most promising.

We sent a document presenting Mage Noir as a candidate, and it seems that they liked it since we finished in the top 10 candidates, allowing us to present the game and its potential in front of the jury. While we had a great time explaining them our philosophy concerning Mage Noir and esport, we felt like a lot of you would be just as interested as them. So let’s discuss about Mage Noir and esport shall we?

As many of you may know, Mage Noir’s origin comes from Vincent and I (Constantin) agreeing on the fact that while most card games tell you that you’re an ultra powerful being fighting another one, they mostly make you feel like you’re managing an army rather than fighting an opponent.

The other thing you may not know concerning the origin of Mage Noir is that we knew we’d like to make a game that was meant to be played in esport competitions.

So we started with that simple question:

“What is a game perfectly tailored for esport?”

We though about it for quite a lot of time to make sure we had the essence of a game made for esport. We came to the conclusion that such a game would need two main features:

And both of these traits can be divided into smaller, simpler concepts.

What makes a game captivating?

First of all, a captivating game is accessible. Which means people who never played it should be able to understand and play it without too much trouble. For this, it needs to be simple, adapted to the player’s availability and with a clear action.

And second, a captivating game is spectacular. With a lot of turnarounds, stunning visuals, and an interesting metagame that shifts at the right pace.

What makes a game exciting?

To be exciting, the game has to be deep, with a lot of strategy involved and just the right amount of randomness so that it relies on the player’s skill rather than luck.

It also has to be creative, to let the player put a little bit of himself and his ideas. This will let the player understand that it’s his creations that allowed him to win the game.

And last, it needs to be unifying. To allow players to share their experiences and to meet new people that enjoy the game as much as they do. Because playing the game can be just as fun as talking about it and sharing stories.

So how do you make a game like this?

We figured out that currently there are several ways of doing so.

The first one is to use an already existing game that is good and to adapt it so that is has the requirements. Then its community will make things work.

The second way is to create a game and use a lot of marketing and huge cash prizes so that people play it.

And the last way is simply to create a game with all of those criterias in mind since day one.

We figured that the last option was the most logical and efficient one. With all of this in mind, we started creating Mage Noir, considering all of these aspects from the beginning up till today.

How is Mage Noir well suited for esport?

Mage Noir is a deckbuilding card game that is made to be easy to learn and hard to master. It will lead to esport events that will bring people together. We want these esport events to happen globally, but to be prepared locally.

To start with, it’s a card game.

And the very concept of Mage Noir being a card game is already a great start. First because it is adapted to many of those requirements we thought about initially, but also because card games are in a great spot currently.

And by that we mean it’s easy to understand. We’ve done lots and lots of playtesting sessions, and a lot of them with people that are not used to games and told us “Oh it’s not my kind of thing, I’ll be slow to learn”. On average, it takes us only 15 minutes to explain the rules and start playing with those who told us that. Which is almost nothing compared to the time it might take for other games.

And for this, we are very lucky to have some incredible artists that create amazing artworks. 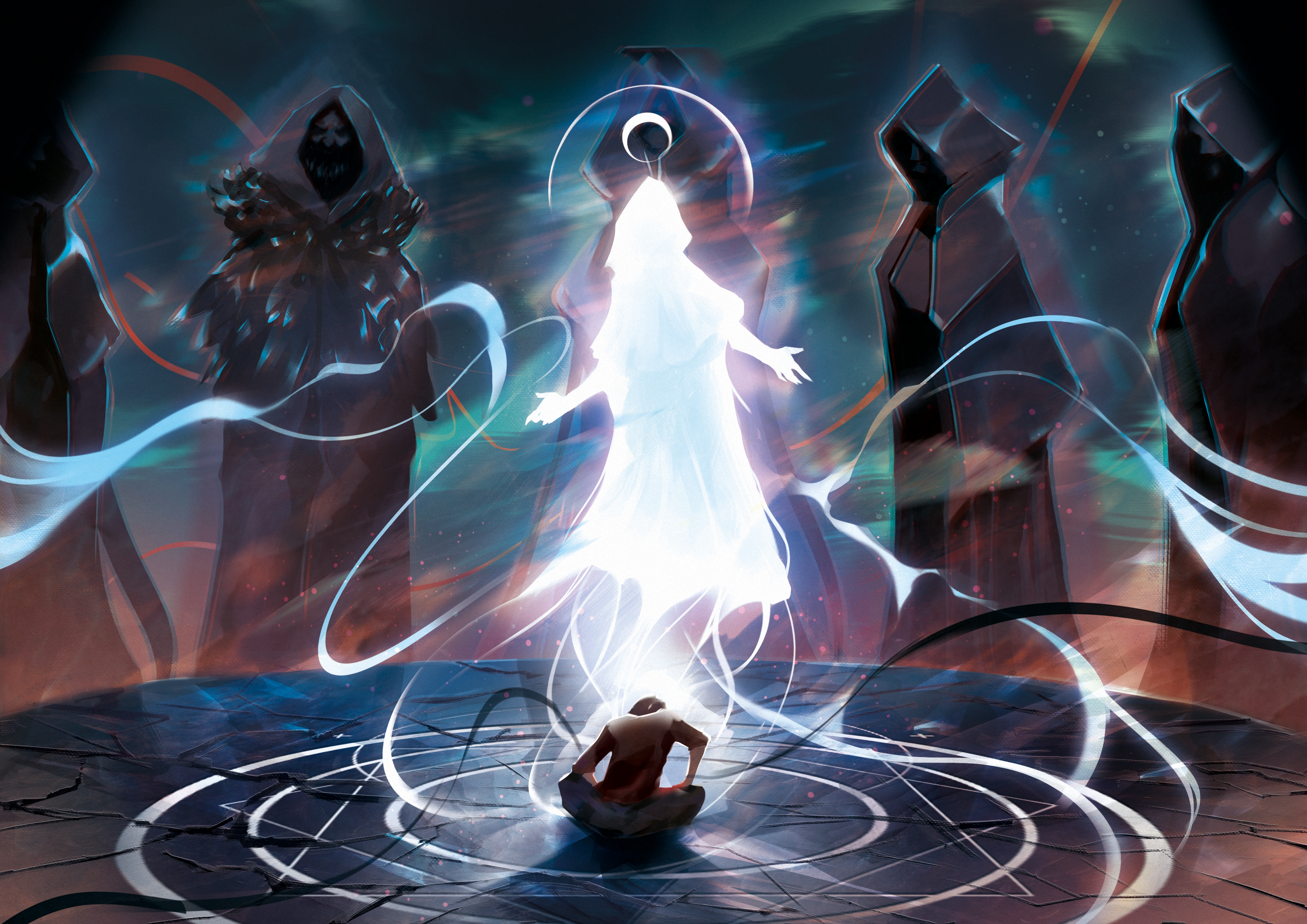 And that’s the kind of art that makes people curious about what the game has to offer.

Mage Noir is a game with unique mechanics that have never been seen anywhere in the world of card games. First of all, the shared Mana pool system is a fairly simple to use mechanic. But aside from being simple, it brings a deep and infinite strategic aspect that we are very proud of. It makes sure that the players interact with each others and think carefully about each of their moves.

The second thing we have going on is a very precise design around randomness. Mage Noir has been designed so that it has just the desired amount of surprise factor. This requires players to adapt to the current state of the game, but it ensures that their strategy is rewarded rather than just pure luck.

A game that allows creativity

Another thing that makes people engage with the game is if they can put a little bit of themselves in it. Which is why we are very proud of our spell crafting system. It allows players to craft their favorite spells in many different ways, adapting to their favorite playstyle.

But spell crafting is not the only thing adapting to the player’s style. Having 6 different elements that players can mix in their deck however they like is also a great way to make sure they can find the perfect gameplay that fits their strategy.

Being a card game is an incredible asset as it allows players to gather and play face to face. This would allow us to create esport events where everyone is playing rather than 10 people playing and all of the rest just watching.

“But how are we gonna achieve that with the pandemic going on? We can’t group…”

It’s also very convenient as it allows people to play in the way they prefer depending on their availability. If nobody is around you can play the video game, if you want to do a cool gaming evening with friends at home, you can get the paper version out.

This results in what Mage Noir is today.

To us, Mage noir is simply a well rounded, interesting strategy game that has a bright future in front of it. We hope the day when we can launch the first competition of Mage Noir is soon. Although we don’t doubt too much about it.

Thanks for reading Mages, we hope you found this interesting. Until thursday though, have a fun and take care of yourself.