We can answer this question from two different points of view:

Mana, a price to pay to perform actions

It is not free to cast a spell, the player has to invest a resource he possesses in a limited quantity: Mana. It is a classical balancing tool that associates an action with a cost.

It is generally considered that Mana is an ubiquitous and natural magical energy.
Magic users possess a personal reserve of Mana, they spend it to cast spells. When this reserve is empty, the Mage isn’t able to perform any kind of magic anymore and has to wait for it to refill.

Thus Mana is an ubiquitous energy that you can spend and get back gradually to perform magical actions (or at least extra-ordinary ones).

There are 6 types of Mana. One for each element of the game. 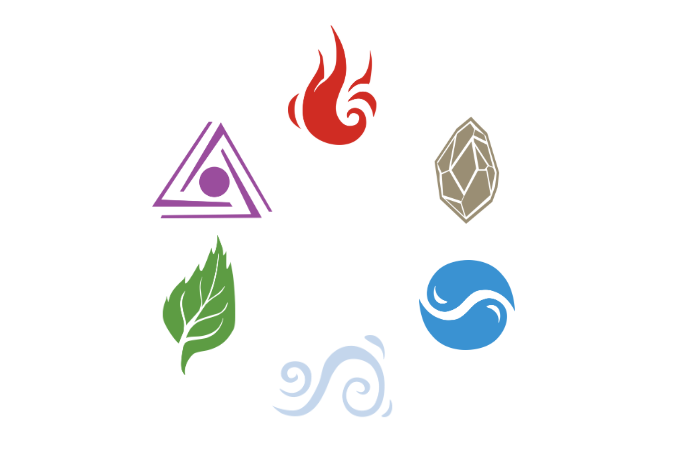 The players have a shared space called “Available Ether” where all the Mana that isn’t anyone’s property (yet) will be displayed.
At the beginning of each of his turns, the player will add 3 Mana of the combination of his choice to the available Ether.
Then, he takes half of the Mana in the available Ether (rounded down).

During the game, every spell that is casted, discarded or sent back in a player’s hand puts all of his corresponding Mana back to the available Ether.

This system, which may seem simple, creates a multitude of implications and implicit functionings that makes it especially interesting to test and master. We intend to let you discover most of them but we also want to give you a quick glance at some of them and give you our opinion on them.

Why is it so interesting?

Here, we’re tackling a part of game design that is very different from a lot of currently existing games since our Mana handling system gets rid of a lot of pre-existing rules.

This system is thus more flexible and really depends on their actions. Where an automatic system ill stay the same with every game, and a system depending of players draws will be influenced by their luck rather than their actions.

A system you can predict and influence

This Mana handling method is predictable by players. It is possible to calculate the resources you’ll get in one or two turns by predicting the actions of the opponent. It is thus a system that rewards insightful players.
However, it is also perfectly possible to influence the opponent’s strategy by performing unexpected actions. It is thus a system that you can both influence and predict. Also rewarding players that are creative in their strategy.

One of the many repercussions of this system is obviously the fact that used mana goes back to the available Ether.
This means that half of the Mana of any casted spell goes back to the opponent on his next turn. This can then create some spells and blows exchanges that are especially spectacular.
The first player performing a destructive spell combo, followed by an answer from the other player, just as powerful. This can accelerate a game and bring some turns of events that are always a pleasure to see. 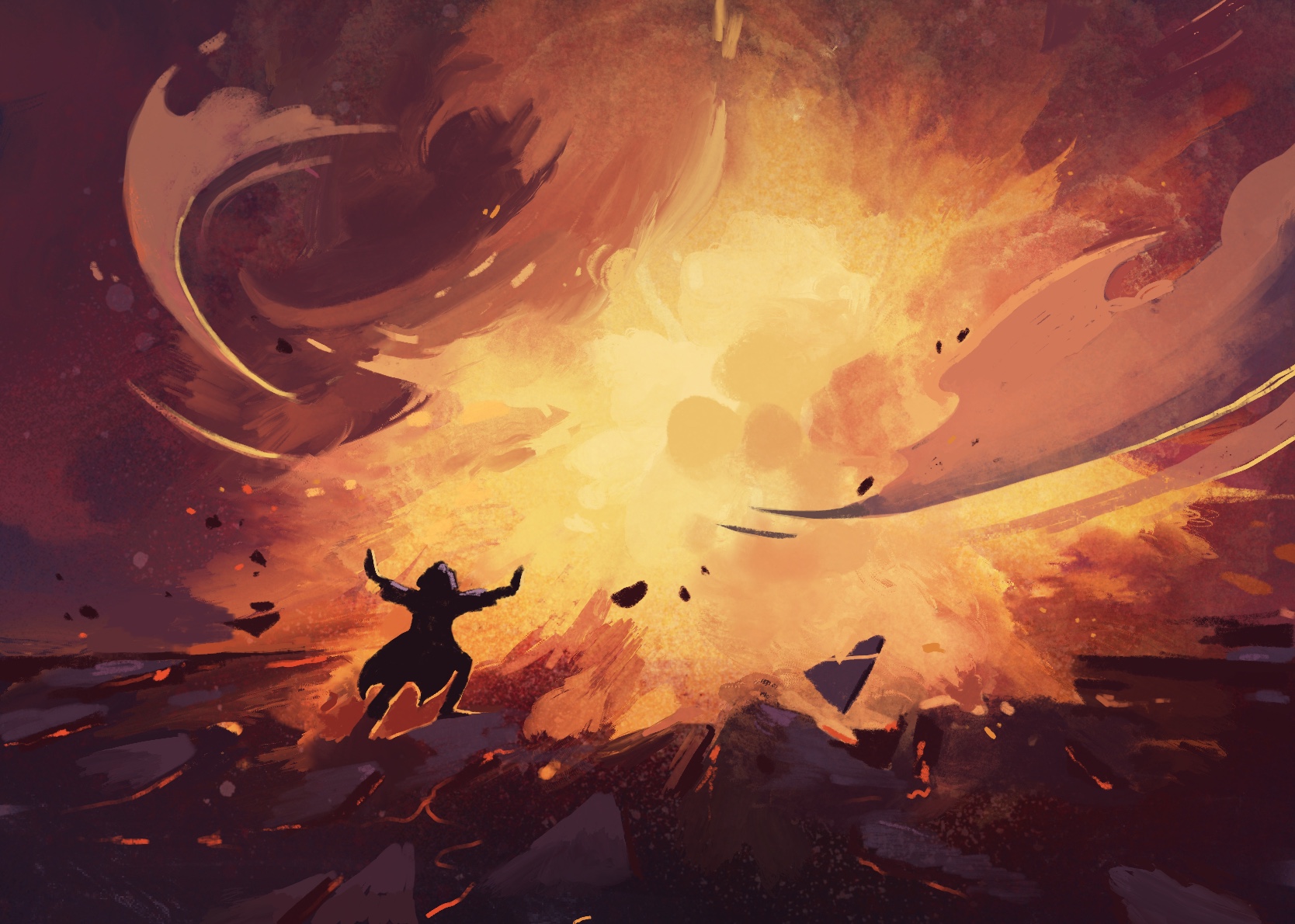 It is always raging to set up your strategy and see the whole game board being wiped out by a devastating spell. Even though it is right that the player that just performed a Tsunami has the pleasure to contemplate the devastation he just brought, or that a Meteorite rain put an end to the ambition of an army of animated tree, it is important to think of the disillusioned player. When the opponent casted his very powerful spell, he unleashed Mana, and a lot of it most of the time. If I’m still alive and my new turn starts, I can gather a huge load of Mana and play my best cards a lot more easily than the previous turn. These new options have a consolatory effect since they bring a certain sense of justice to the current game: I got hit hard, now it’s my turn.

The beginning of a turn is very steady. By simulating the functioning of this system, we notice that without any direct action from any player, we get a stable state at soon as the third turn starts. Every player gets 3 Mana per turn.
This creates game states that are very different depending on the players, their decks and the cards they have in hands. Some will keep their Mana to increase their reserve slowly and avoid giving resources to the opponent.
Others will try to launch spells quickly to force the opponent to answer with their own spells and give them some Mana back in the meantime.

Every single player turn adds 3 playable Mana in the game’s total. This increase having virtually no limit, players thus have a power potential that is infinite. Needless to say we already had games that ended with extraordinary last turns.

In Mage Noir, a card with a big Mana cost will be available in a reasonable number of turns if it is the only card you’d like to use. Just for comparison, a card with a Mana cost of 7 will be playable: 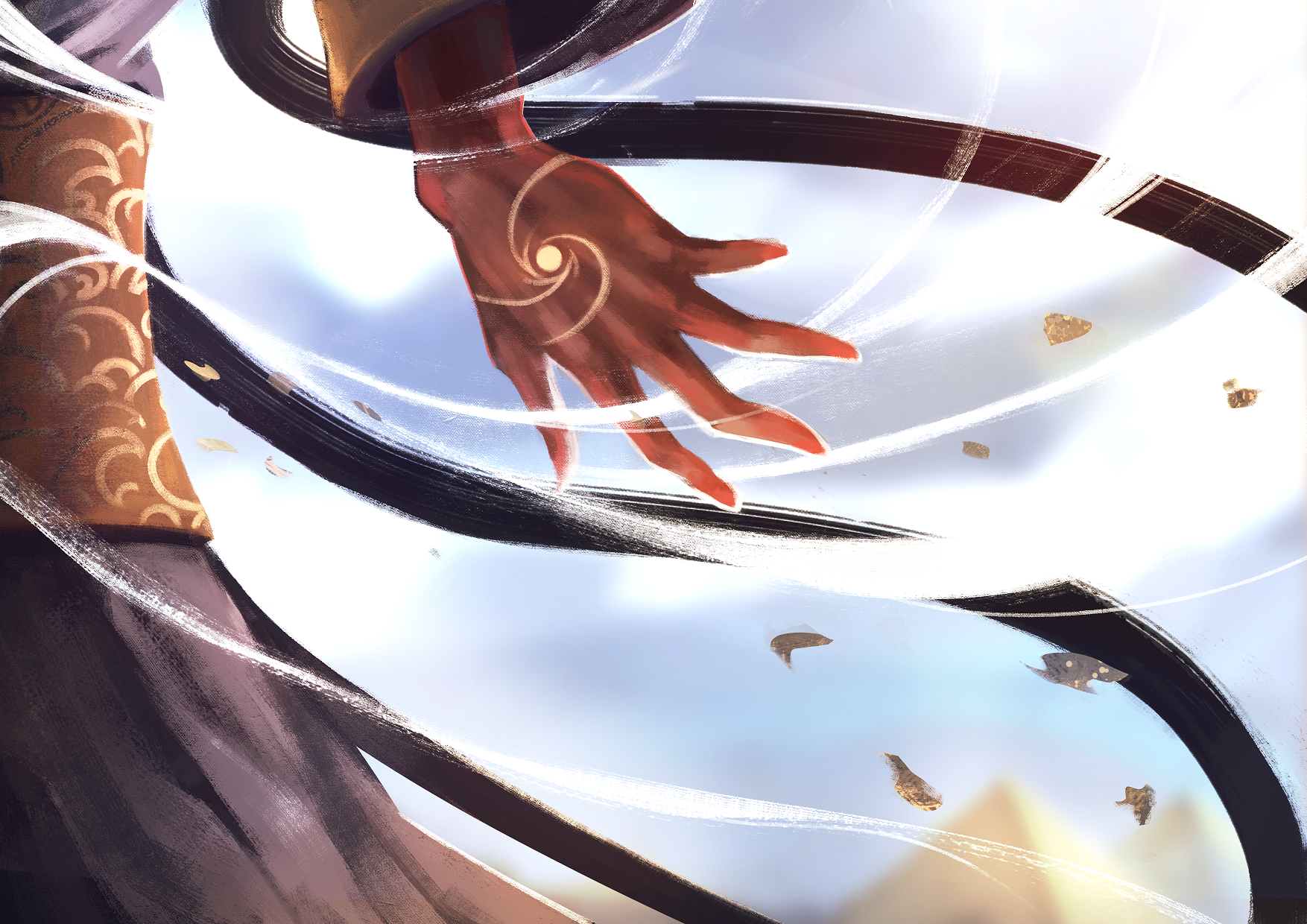 The game includes Mana cards for every element. It is easy to take and move with your spell collection, because it has the same format.

But you can use anything you want! Dices, candies, tokens or a counter system that you can create yourself. Anything is usable as long as you have enough of it and that you can differentiate them for the 6 different elements of the game.

It is a system that allows you to be creative. When we play at home, we personally like to use small colored wooden cubes that are often found in other board games.

The shared Mana pool is also thought of as an element of the Mage Noir universe, along with a game mechanic.

Two Mages are about to battle. Each of them is drawing ambient Mana that they condense to cast their spells. Every prepared spell keeps its associated Mana in its core before unleashing all of its might and disperse its condensed Mana back into the environment.
Every Mage that receives a blow can then get a part of this energy quickly to use it against his opponent.

This logical scenario corresponds perfectly to this system. And it’s a pleasure for our imagination.

We managed to set up a simple and original system while keeping a certain depth. It has lots of implications on the gameplay that will reward the players with the sharpest minds. However it still stays cohesive and calls for everyone’s creativity.

We hope you’ll appreciate discovering it as much as we appreciated creating it.